Meet Our Wonderful Staff
Learn more about our instructors and hear their stories.

Meet Our Staff
Learn more about our instructors and hear their stories. 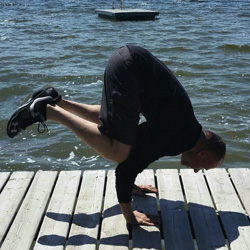 I started my yoga journey during a difficult time. I was physically and emotionally depleted from a lifestyle of desk work, stress, inactivity, smoking and bad eating habits. I felt like Joe Cross from the movie "Fat, Sick and Nearly Dead."

I went to my first yoga class hoping it could be a gentle way of becoming more active. The class was too advanced and I felt overwhelmed. But I was inspired by the teacher's words about moving from a place of self-compassion and acceptance.

My second class was eight months later. In that time, I'd started eating healthier foods, quit smoking and was walking every day. But I was still very overweight, felt exhausted and was scared of movement beyond walking for fear of re-injuring a problematic back.

I came to Inner Peace Yoga and was happy to find yoga classes specifically for people with back pain. And I was delighted to find such a positive, healthy and inclusive community. I began attending Critical Alignment Therapy and Yoga for Backs, and after a few weeks was confident enough to try other classes at the studio. I was hooked and began coming to one, two and sometimes three classes a day.

From that point, my body's transformation felt miraculous. Without any crazy dieting or punishing fitness regimes, I began steadily losing excess fat and adding strength. I discovered my body was capable of far more than I'd imagined.

After this, it felt like a natural progression to take IPY's teacher training program. I also began training in Critical Alignment Therapy, received my Level IV certification in spring 2016 and am currently apprenticing under Joelle McDonald.

As a teacher now at IPY, I feel blessed to be a part of each student's own yoga journey, at whatever stage that happens to be. I strongly believe in the power of mindful movement as a tool for healing body and spirit and try to bring this into every class.

I look forward to helping you discover how yoga can be a part of your own transformation!

We are located on the 2nd floor and there is an elevator for wheel chair accessibility or for those who can not use stairs.